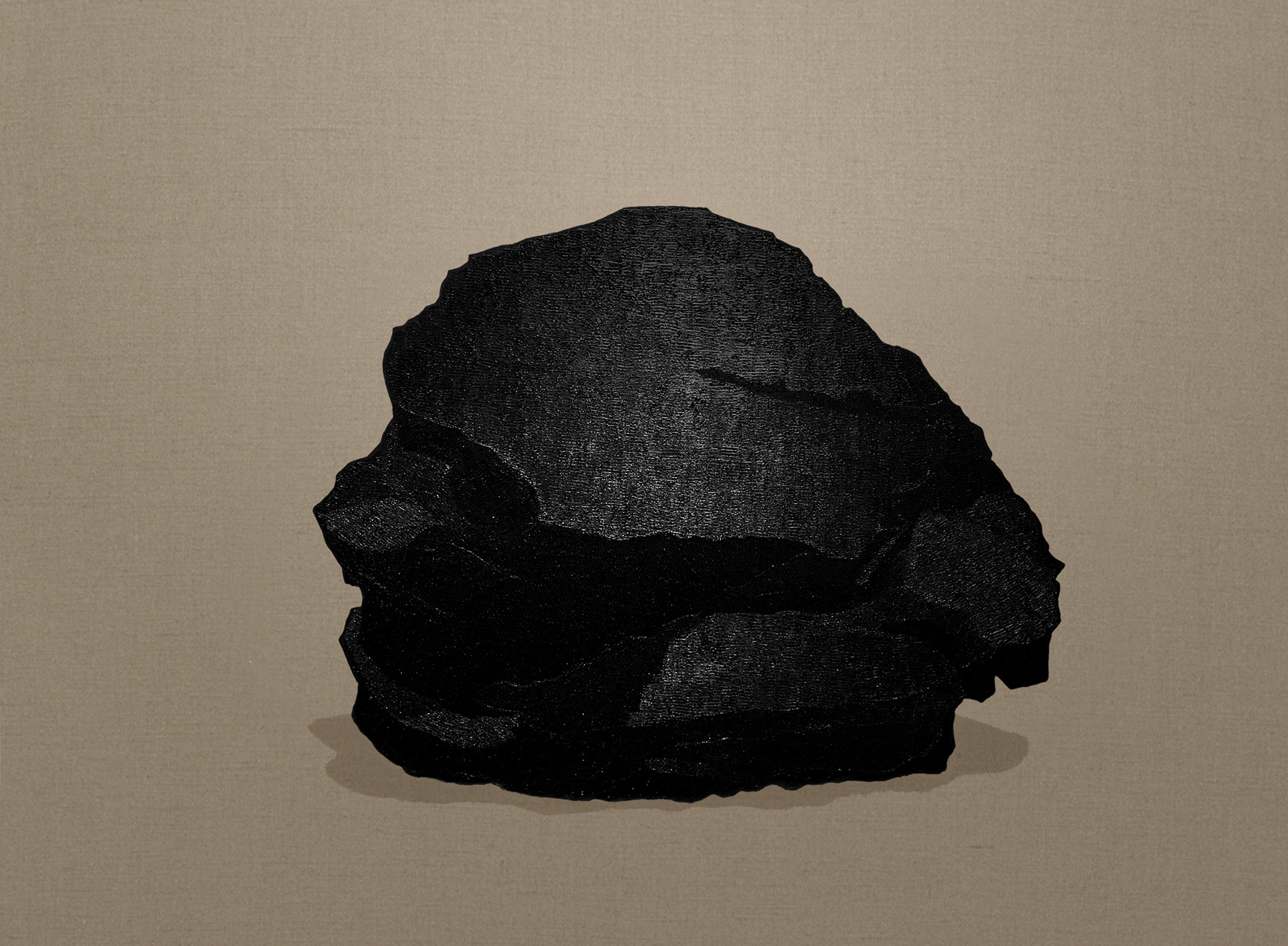 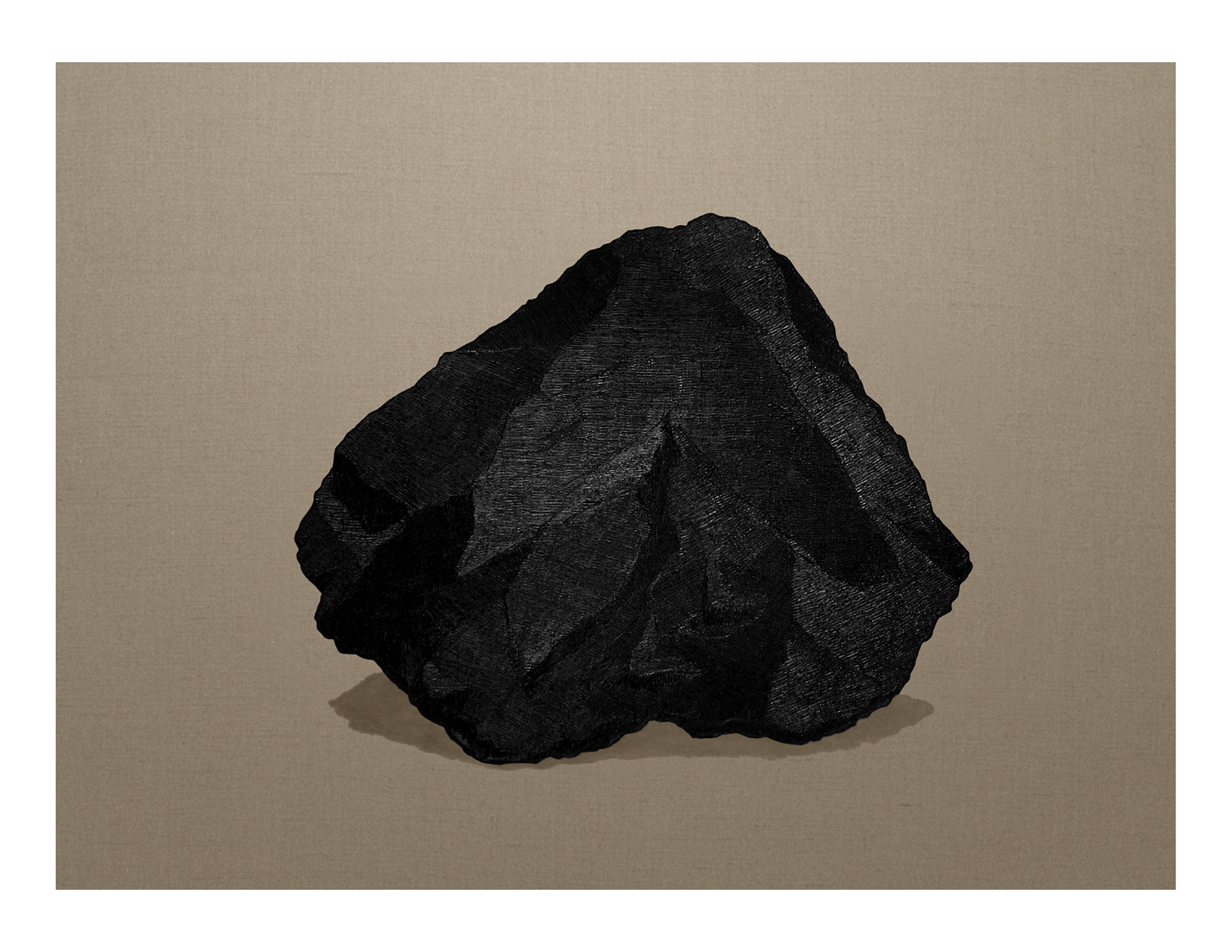 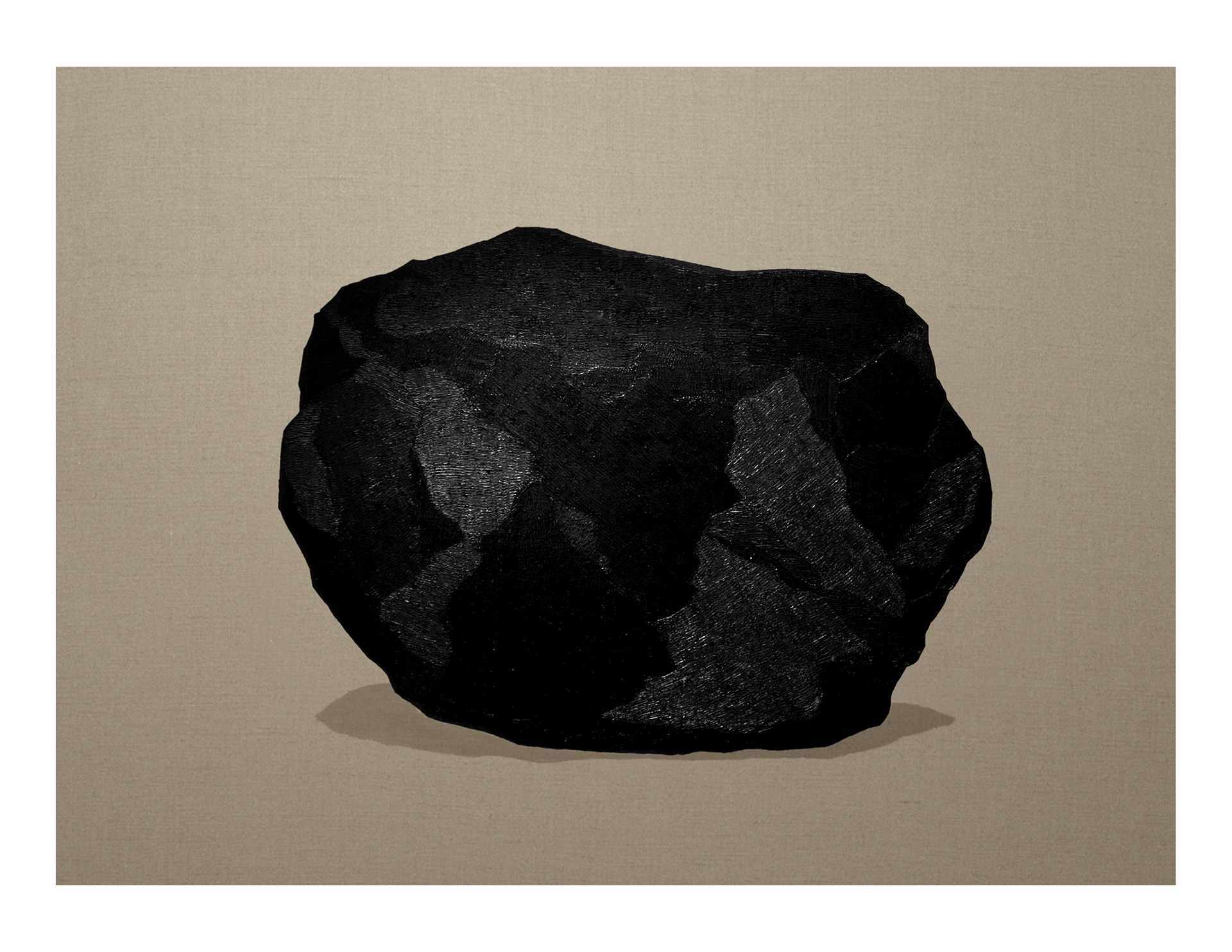 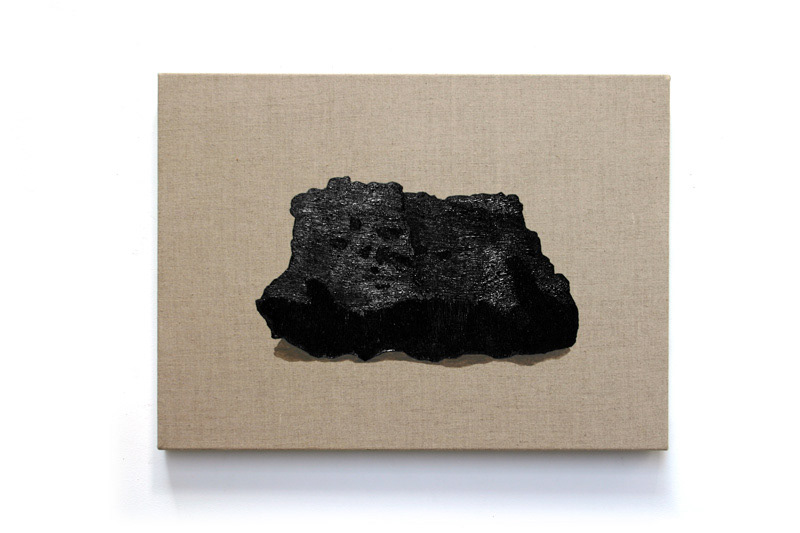 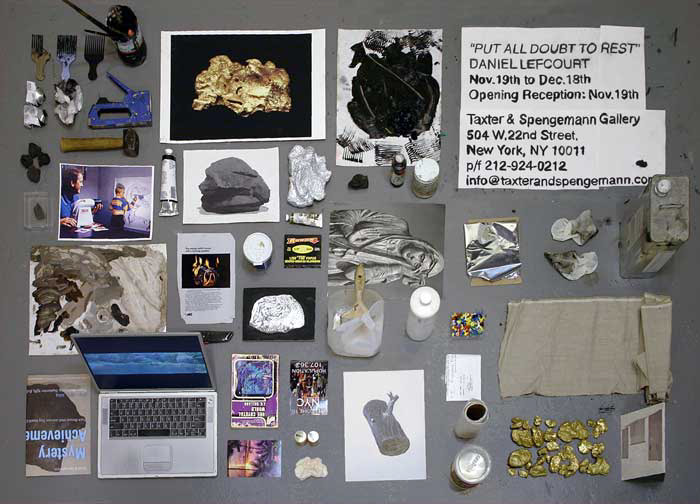 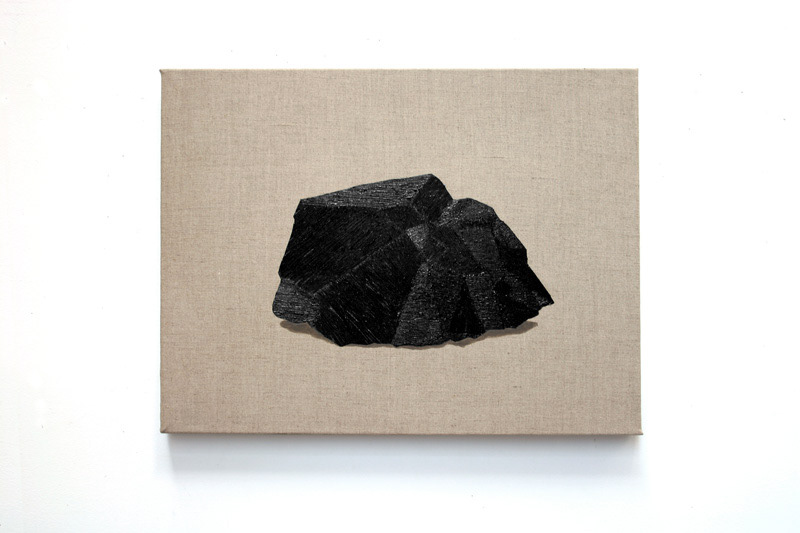 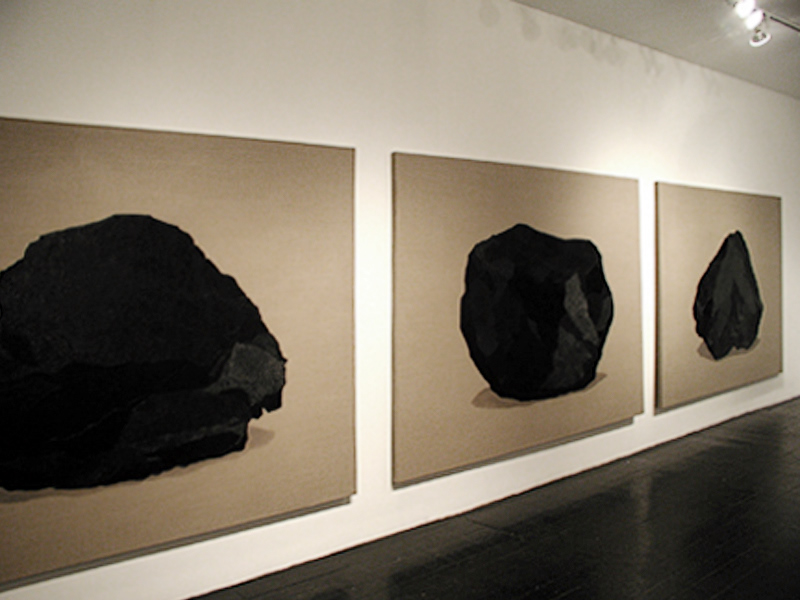 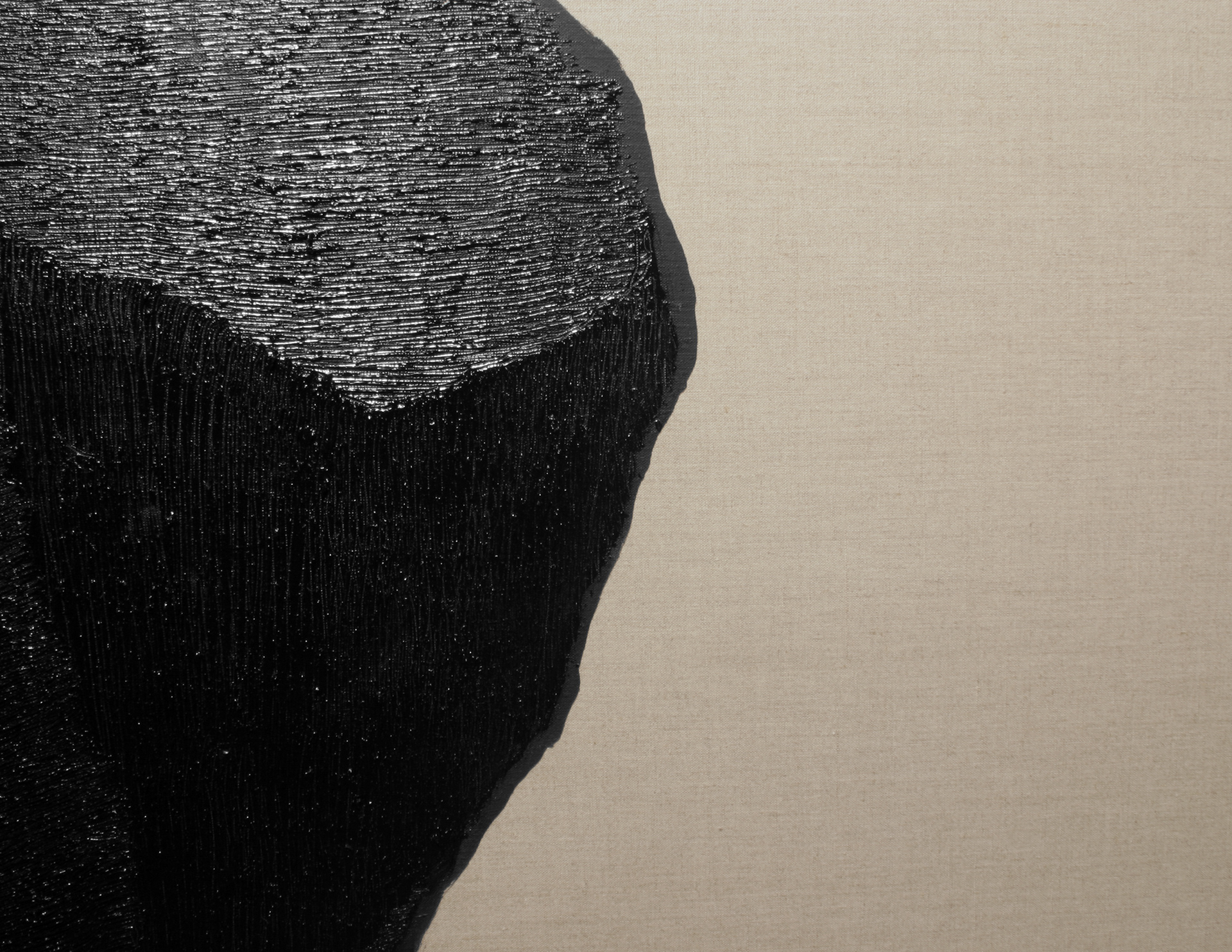 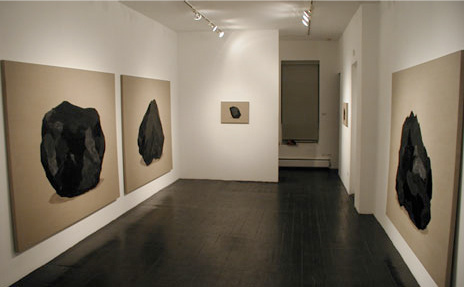 Daniel Lefcourt, "Put All Doubt to Rest," Nov. 19-Dec. 18, 2004, at Taxter & Spengemann, 504 West 22nd Street, New York, N.Y. 10011
Daniel Lefcourt is a non-painter's painter.
He's an artist who happens to make paintings -- although maybe this could be said of all painters. In the 1970s he might have been called a conceptual artist; in the 1980s, a commodities artist. He's part of a tradition of artists who aren't defined by painting but who use it as an occasional tool. Practitioners include On Kawara, John Baldessari, Allan McCollum and, lately, Cheney Thompson, as well as Francis Alys and Jeff Koons, who both hire others to make their paintings. Lefcourt, 29, also makes videos, photographs and sculpture. In his seven-painting, one-video New York debut, Lefcourt is doing something young artists often do: setting up and working within very narrow prescribed limits in order to explore the parameters of an idea.
Each Lefcourt painting depicts a jet-black rock shape on russet-colored raw linen. All the canvases look the same and are equally good or bad depending on your point of view. I find them absorbing if limited. The paintings come in two sizes: 6 x 8 feet over-the-couch biggish and 1 1/2 x 2 feet in-the-hall small. Lefcourt doesn't vary the color and uses the same materials and tools in each work. There's something pat and a mite too clever about them, and there's not much experimentation going on. Whatever, he doesn't need to make more, or if he does he should admit to himself that he would be making them primarily to sell.
Nevertheless, all the paintings are fairly mysterious, serious and sensual. They're also somewhat funny. Beneath each boulder, Lefcourt has brushed in a streaky off-white or grayish shadow. This insignificant, cartoony gesture is the engine that drives everything. Although it turns the paintings a bit hokey, surreal or illustrative, it alleviates the abstractness, curtails lurking romantic and existential tendencies, positions the work between being non-representational and realistic, and shifts things toward the idiosyncratic and the phenomenological.
The surface of whatever these things are is tar-like and tacky and looks to have been combed or scraped with a small pick or rake. In this way, Lefcourt, like Agnes Martin before him, creates numberless unpredictable variations within his exceedingly prescribed system. The surfaces of these shapes are utterly opaque, but the altering directions of the marks generate unexpected optical effects. Paintings look silvery or slate-like, seem to reflect ambient color or emit a phosphorescent glow. But the work's adamant physicality always reasserts itself. Lefcourt's paintings are blacker than Ad Reinhardt's, as dense as Richard Serra's drawings, and intermittently as mesmerizing as Vija Celmins's starscapes. They also recall the iffier work of Donald Sultan. But no matter -- these paintings turn into meditative isotopes, philosopher's stones and vehicles for thought that manage to stand on their own.
The title of the show, "Put All Doubt to Rest," is a brusque absurdity that reinforces Lefcourt's connections to Kawara's pursuit of infinity and McCollum's desire to eradicate personal choice. Ironically, this title implies the exact opposite of what it seems to mean. These paintings are riddled with doubts about representation, abstraction and painting itself. Individual tiles like The Banality of Evil and The Pleasure of Pity and Fear underscore this while also recalling Frank Stella, who likewise methodically applied black paint to raw canvas and gave his work provocative personal-impersonal titles like Marriage of Reason and Squalor and Arbeit Macht Frei.
Lefcourt's rocks aren't narrative, they're not pictures or portraits, and they're not pure abstraction. Simultaneously jokey and substantial, they occupy an unstable theoretical space. They are and aren't a search for something, they don't take a stand but seem to stand for something, and, most interesting to me at least, they're pictures that don't represent what they represent (you're not thinking about earth science in front of them). These works straddle gaps between physics and metaphysics, the mundane and the mythic, and Pop art and Abstract Expressionism. As with Pollock or Newman, you take in a Lefcourt in a totalizing glance. Yet these paintings are peppered with impish mischief.
This quirkiness brings us to Warhol's famous remark about wanting to be "like a machine." A fuller rendition of the 1963 quote is illuminating: "I want everyone to think alike," Warhol said. "Everybody looks alike, and we're getting more and more that way. I think everybody should be like a machine. . . . [S]omeone should be able to do all my paintings for me. . . . When I was a commercial artist I had to invent [things] and now I don't." A year later, Gerhard Richter echoed the same sentiments in a note to himself about the "freedom of not having to invent anything." A decade before this, Jasper Johns talked about painting things "I didn't have to design," saying this "gave me room to work on other levels."
Lefcourt obviously isn't working on those levels. But he is eliminating choice and has hit on a zero-expressive method that carries a lot of expressiveness. These works enact the friction between painting as contemplative object and painting as commodity. In a modest, roundabout way these rocks are Lefcourt's electric chairs and disasters: occasions to muse about life, death, presentness and painting.
JERRY SALTZ is art critic for the Village Voice, where this article first appeared.
Works on paper 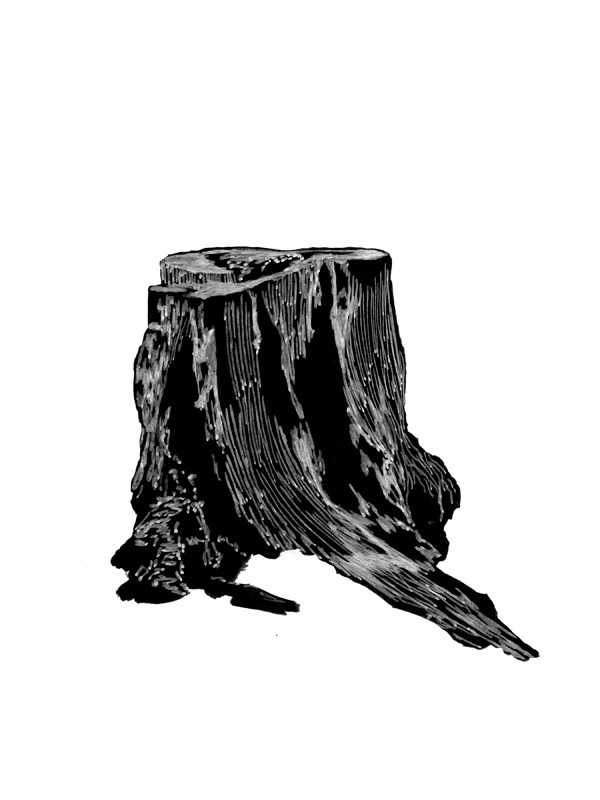 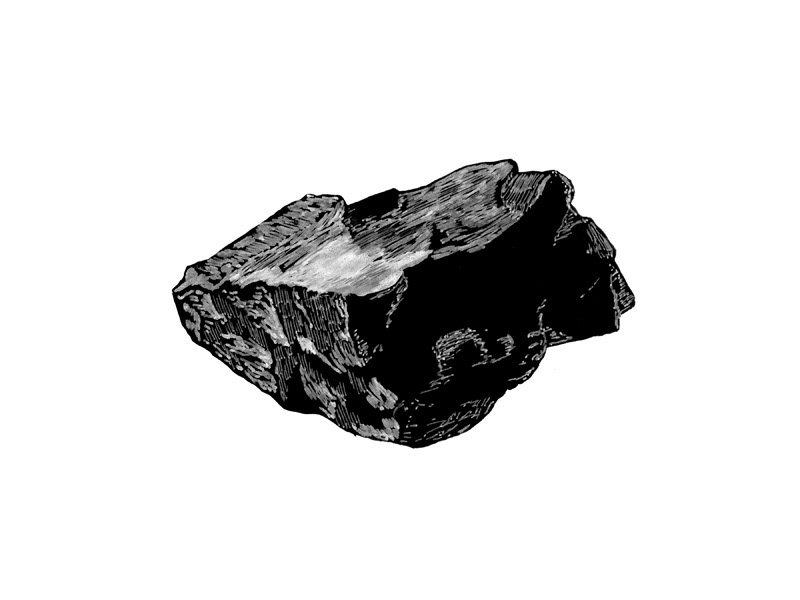 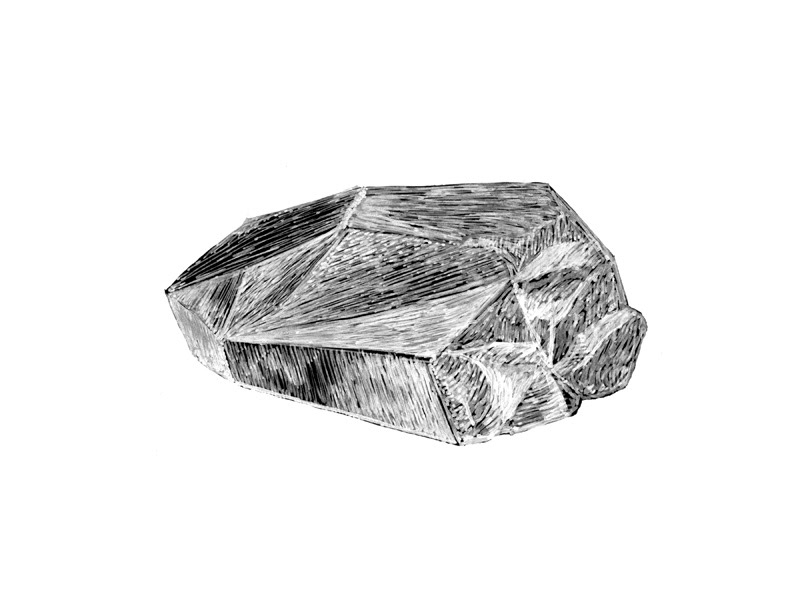 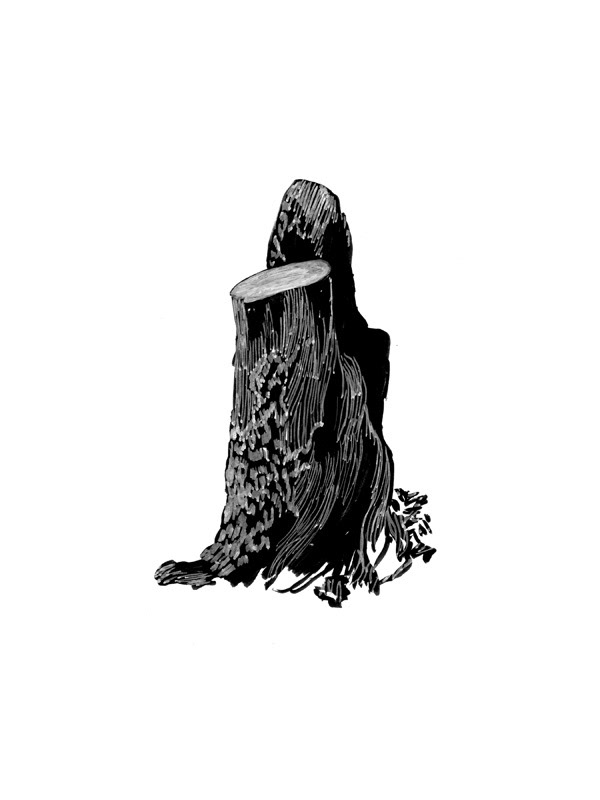 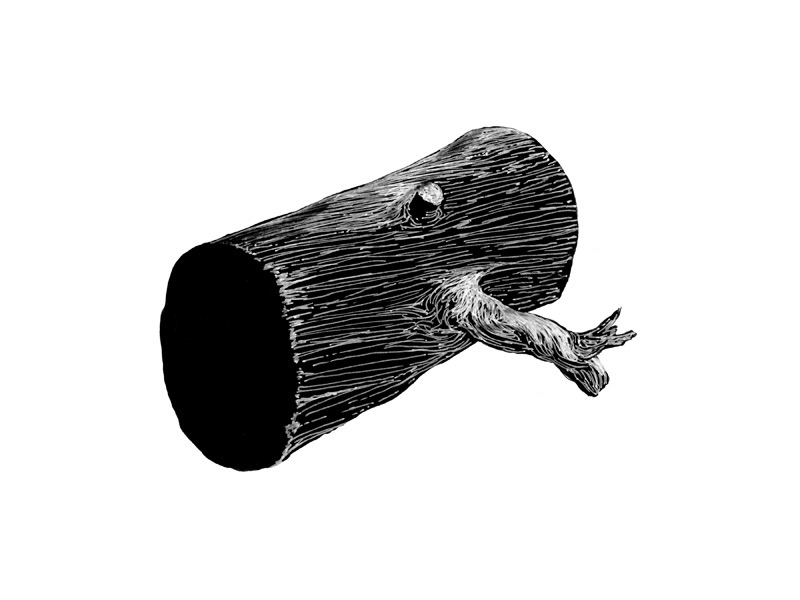 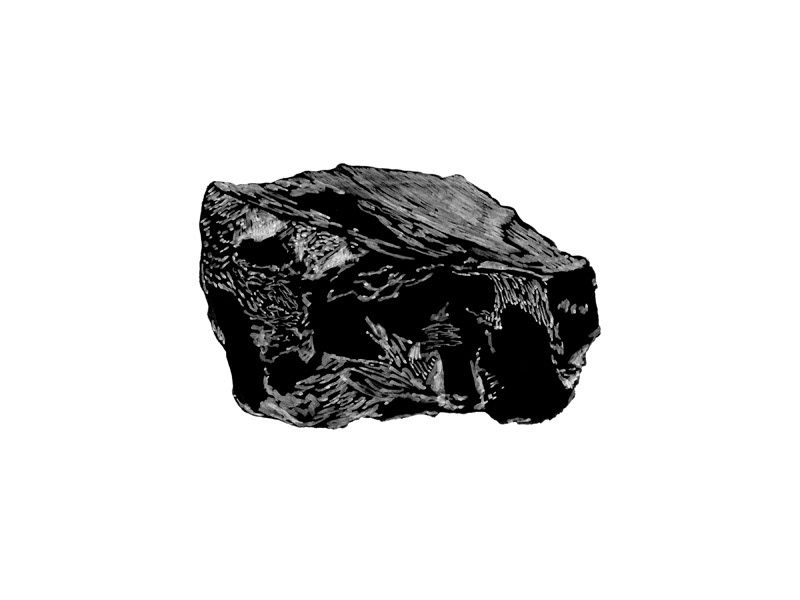 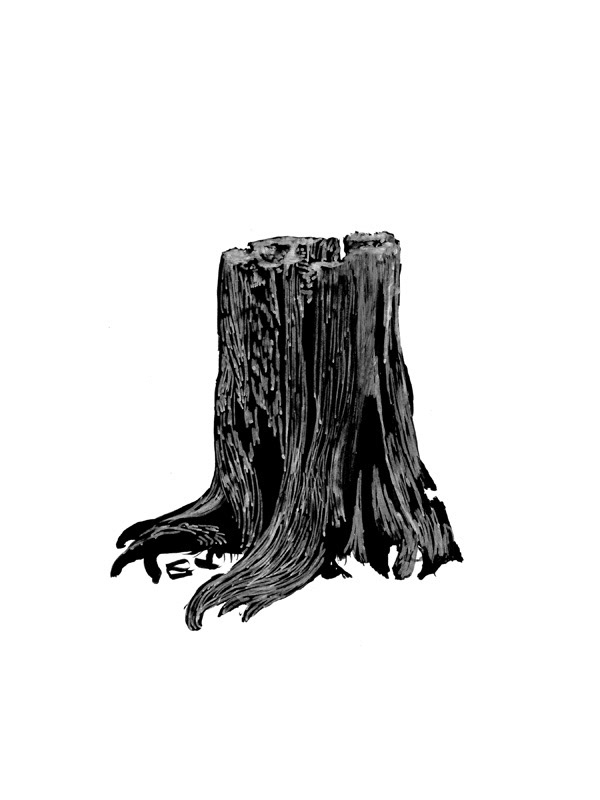 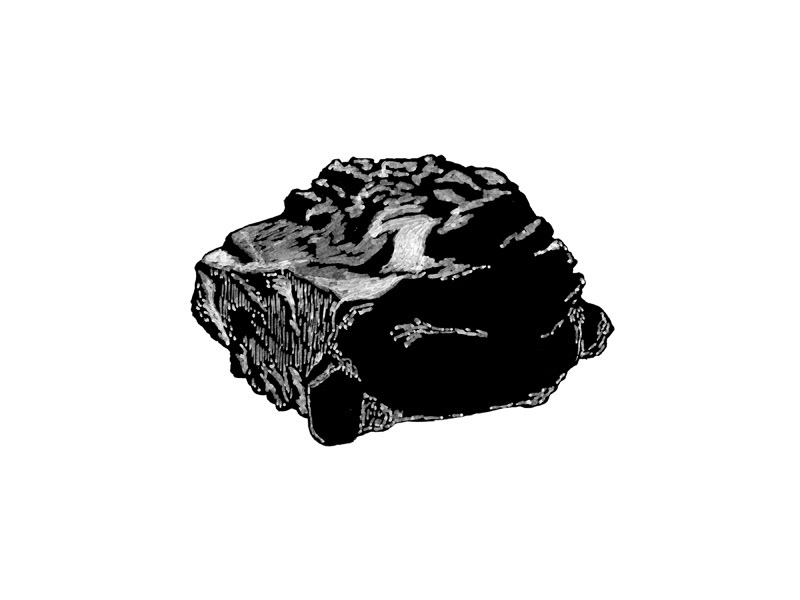